Family and Flowers: A Celebration for Camp Fire Survivors in Redding

On August 17th, seventeen Camp Fire survivors and ten Tzu Chi disaster case managers and volunteers joined together for a day of activities at a mobile home in Redding, CA. The day was devoted to showing support for survivors who had been through much since the disaster.

Coincidentally, it was also the birthday of the homeowner – Regie Elizabeth Greywolf. Tzu Chi volunteers prepared cake and candles to celebrate the special occasion as Greywolf officially reached 60 years of age.

Having this gathering means everything to me, I’ve lost lots of friends and family; they scattered everywhere. It’s almost like having a new family living here again.

Many homes were completely destroyed or badly damaged when the dreadful Camp Fire began to burn horribly out of control on November 8th, 2018. Having lost their homes to the blaze, displaced families had no other choice but to relocate and try to begin anew.

In June of 2019, Tzu Chi’s disaster case manager, Julie Lin, got in touch with Regie Elizabeth Greywolf, who had sold her used trailer to Julie Lin’s case management clients.

Knowing of Butte County’s disaster case management services, Greywolf had notified Julie Lin of more than 10 families who are Camp Fire survivors – including herself – who have relocated to Redding. Unlike those who stayed in Butte County, survivors who relocated elsewhere do not have access to these recovery resources.

After settling down in Redding, Greywolf took the initiative to launch a support group, as she knew more people like her had lost much to the fire. “I realized my house is the only one big enough,” she said. And so, she used social media to invite more survivors to join together. 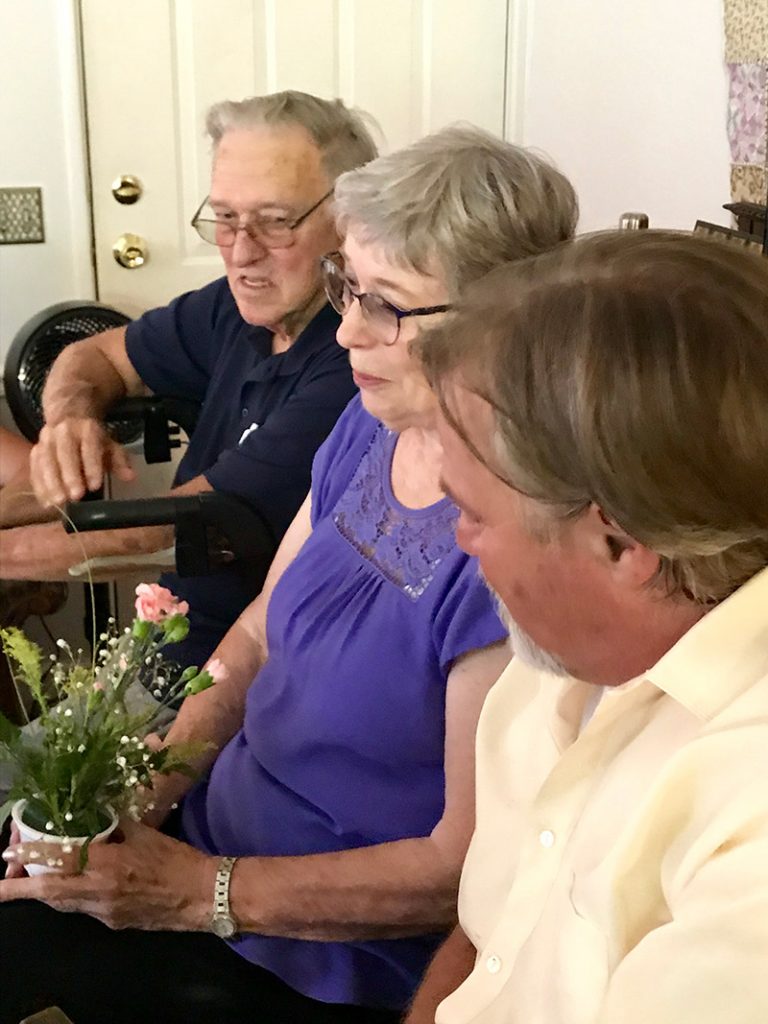 “[The survivors] started calling up and said ‘We’d love to come. We have no resources. We have no one to talk to. We feel alone and abandoned. What do we do?’” Greywolf expressed. “It’s a social gathering, but it’s also a healing station.”

The team wished to provide more support to survivors beyond the disaster case management, however. Thus, volunteers from the Bay Area decided to organize a flower arrangement activity to heal their hearts. Six volunteers traveled four hours to Redding that morning with carnations and baby’s breath in the car while four more case managers and volunteers departed from Chico.

A Tzu Chi volunteer named Munya Chu led the flower arrangement session, and guided everyone to achieve a tranquil state of mind while arranging the flowers.

Diana Love, who had been a Paradise resident for 23 years, left in search of affordable and stable housing after the fire consumed her home. She now lives in Anderson, CA, with her husband and her daughter’s family.

“Flower arrangement was such a simple thing, but it meant a lot,” Love said. She arranged the flowers with some lovely greens in a recycled yogurt cup.

Pointing to two long, thin leaves, Love explained, “This represents me and my husband. We’re trying to lead our children by example and give them direction.”

She said the pink carnations represented her children, and the white baby’s breaths represent their grandchildren. “And then the greens are just [the] love that holds us all together.”

Alicia Blum is a Camp Fire survivor who purchased a brand new home in Paradise on August 7, 2018, after moving from Chicago. “Ironically,” Blum said, “we were only there for three months.”

Currently, she and her family are settled down in Manton, CA, which is a one-hour drive from Redding. It was months ago now that Blum’s wife had seen Greywolf’s post on Facebook and was inspired to join this family.

Blum told us that she didn’t plan how she would arrange the flowers beforehand. It was only when the piece had fully come together that she realized the special significance behind her flower arrangement.

She explained that the pink carnations are her family, and each of the different leaves symbolize the family’s strength, the unity that holds the family together, and the whole of the family respectively.

“[When I was done], I realized there are nine flowers, and two here haven’t bloomed. I was a foster mom for many years before I came to California. I have nine foster kids and two foster babies. And I was the unity that kept them together!” Blum shared her story passionately.

Twenty-seven people gathered in the living room of a mobile home wasn’t the usual setting for the flower arrangement activity. For Munya Chu, who has taught many flower arrangement sessions, this was her first time teaching in a slightly more challenging setting.

“I was imagining we would have tables, like in our chapter office, so I could prepare the flowers and materials carefully and neatly to embody the Jing Si spirit. But when I came in, I realized there was nowhere for me to place them,” Chu said.

As it turned out, however, Munya Chu quickly adapted to the space. “I learned that when I do not insist on having a particular setting to teach,” she explained, “the result is unpredictable,” and the activity ultimately still inspires joy and harmony within their hearts, indeed!

We created the Hope Heals campaign to support 10,000 families affected by the Camp Fire.