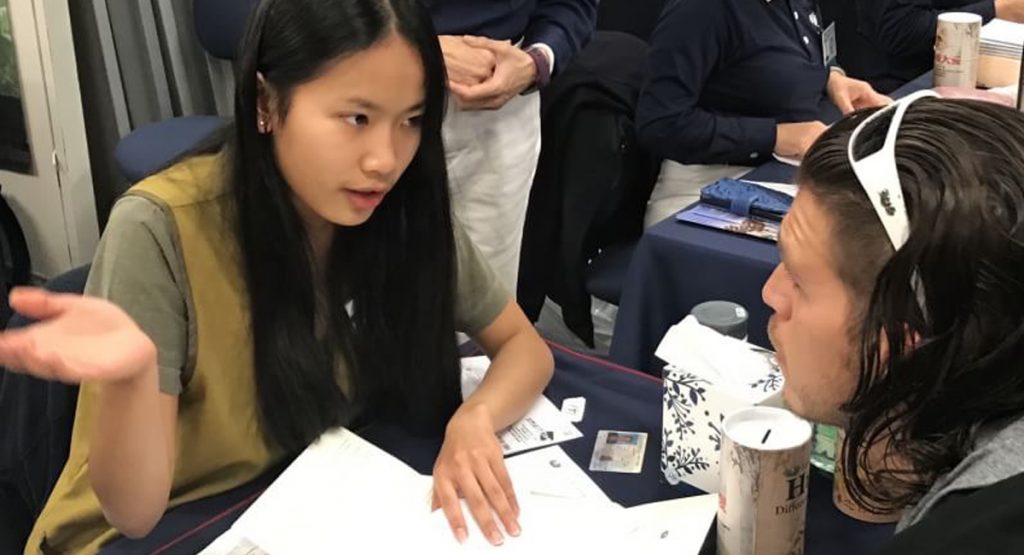 Sovannlina (Lina) Hong is from Cambodia. Two years ago, she came to Chico as an exchange student, but soon after returned to her home country in order to finish high school. A month ago, she came back to Chico and intends to follow in her father’s footsteps and pursue a career as a doctor here in the United States.

One day Lina saw her mother’s friend sharing news of Tzu Chi on Facebook. She was looking for an opportunity to become a volunteer and help others at that time, when her mother told her about Tzu Chi. With great excitement Lina joined the Tzu Chi Disaster Relief team.

“Even though I had never volunteered and don’t know about other groups, I found that I did a lot here at Tzu Chi,” she said, and then paused to try and control the tears in her eyes. “You don’t know these victims, nor are you their family or friend. But you still come here to help them,” she continued. Lina was touched by the unconditional love Tzu Chi gave to others in need.

It was Lina’s third day to be at the Tzu Chi service station. At 1 pm, she came directly to the center right after finishing her class. She explained how compared to the Tzu Chi organization, she felt that what she did was so little.

The other Tzu Chi volunteers encouraged her by saying that by becoming a doctor, the help she can give will be infinite. In the future she will be able to join TIMA, and travel to different places in the world to help the poor and the sick.

When asked about her feelings of joining the Disaster Relief team, she said with tears in her eyes, “This is also the reason why I came back [to the United States], to work as a volunteer, because I feel the sincere efforts of Tzu Chi.”

Although Lina has only just met Tzu Chi, she has been able to learn more about Tzu Chi and take care of the survivors with great love and compassion. When guiding survivors to their seats, she was so focused that everyone was inspired by her dedication and resolve.

PrevPreviousWhen The Sprout Grows Into A Tree
NextLove and Hope After the Camp Fire: The Stories Behind the NumbersNext