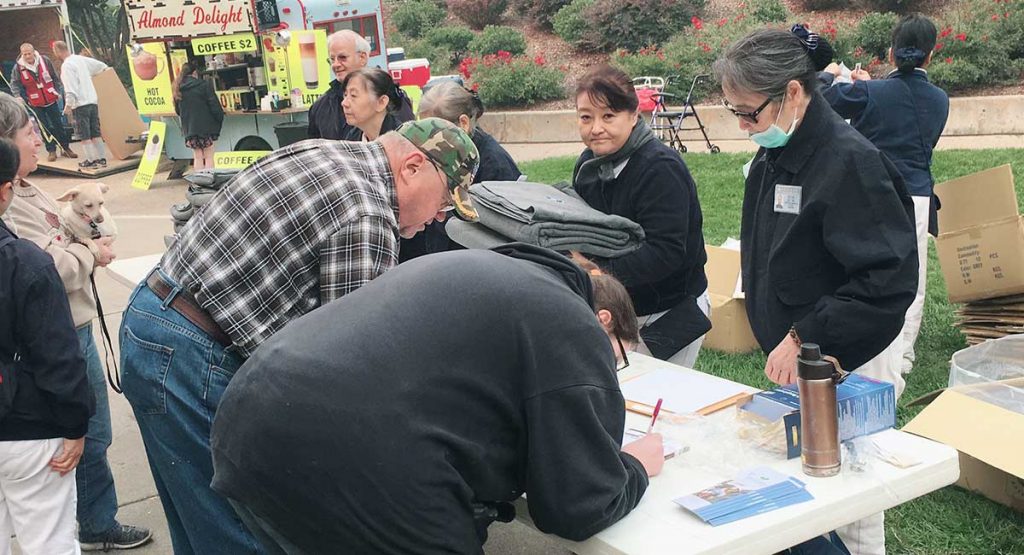 Whenever I heard the victims said that they had received the help of Tzu Chi and  wanted to be a volunteer in the future to help those in need, my heart was always touched, and I felt all the hard work was worthy.

Melissa Johnson grew up in the Bay Area and moved to Paradise City 14 years ago, settling in a rented home. In mid-October this year, she finally realized her dream of purchasing her own house. On November 1st, she moved into that new house and upgraded to “class with property.”

Unexpectedly, as soon as she and her family moved into their new home, the mountain fire came calling.

On Friday, November 9, at around 8am, Johnson’s eldest daughter called and said that her school had canceled class and asked her mother to pick her up. Johnson walked out of the house and prepared to go out. She saw a flustered scene in front of her. The air was filled with smoke, and she saw ashes, flames, police cars and fire trucks everywhere.

She picked up her daughter from school and immediately drove to the middle school to pick up her son. Johnson was 36-weeks pregnant at that time. Her husband decided to pack their bags and evacuate from their homes. They also advised Johnson’s mother and two other relatives to leave the area as soon as possible.

Johnson and her husband continued to drive south and arrived to Sacramento, temporarily staying in a small hotel. Their baby successfully arrived one week later—a lovely 11-pound boy.

When Johnson’s mother told her to register with The Federal Emergency Management Agency (FEMA), Johnson sought out Tzu Chi. Having never heard of Tzu Chi before, Johnson was incredibly moved after hearing the organization’s introduction and mission, as well as the purpose of its Bamboo Bank. Tzu Chi offered a helping hand during this dark time and provided Johnson’s family with the most direct care and assistance.

Johnson said that she found a temporary apartment recently. There are still so many things to deal with—going to the hospital everyday to feed her baby, helping her eldest child transfer to school on Monday, negotiating with the house creditors about the compensation plan. Once everything stabilizes, Johnson hopes to volunteer with and participate in organizations like Tzu Chi to give back to the community.