Locked Away, But Not Forgotten

Locked Away, But Not Forgotten

Tzu Chi’s Jing Si Aphorism Book Clubs are bringing Buddhist wisdom to US prison inmates, and the results are remarkable.

Everyone deserves happiness, peace of mind, and compassion.

But what about those who have committed crimes, and are now serving time in prison for their deeds? Is it too late for them to find the peace and harmony that every human being seeks?
Not according to Tzu Chi volunteers. 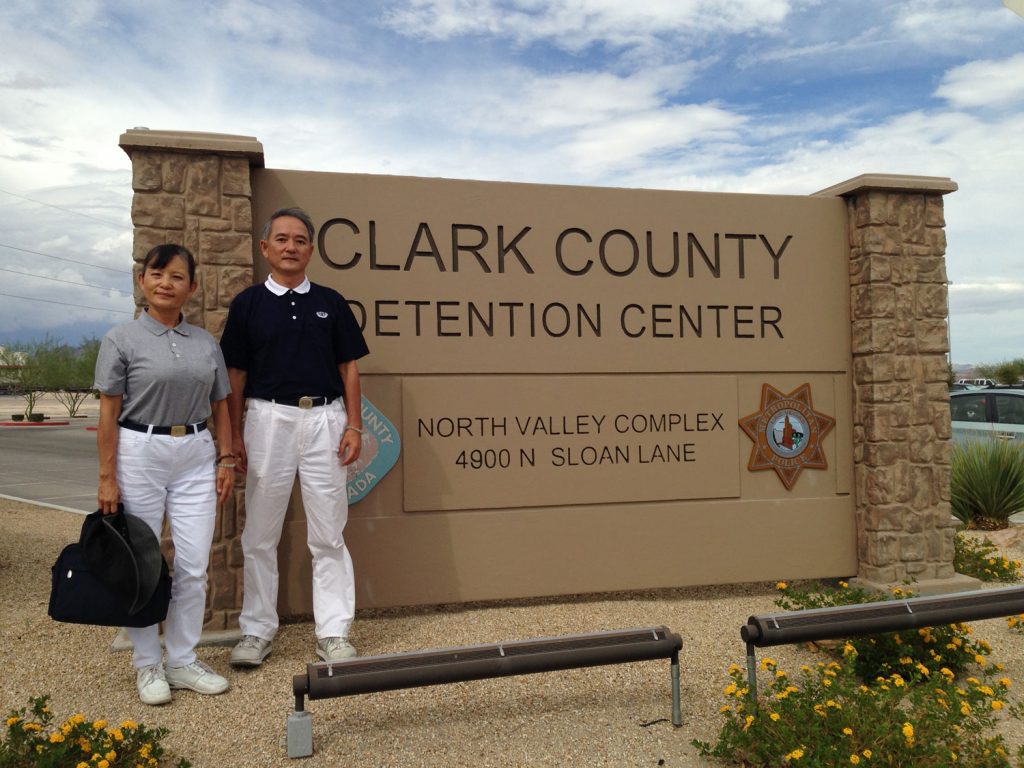 It all started in 2013, when one Tzu Chi volunteer had the idea of donating Jing Si Aphorisms and Tzu Chi USA Journals to prisons. It was a straightforward plan, which proved quite challenging to complete. But today, the fruits of that dedicated effort are evident, given the profound and ongoing personal contact and exchange of written communication between Tzu Chi volunteers and inmates across America.

Las Vegas Nevada’s Clark County Detention Center, also known as The North Valley Jail, was where the journey of bringing Jing Si Aphorisms and the Buddhist wisdom they contain to US prisons began. 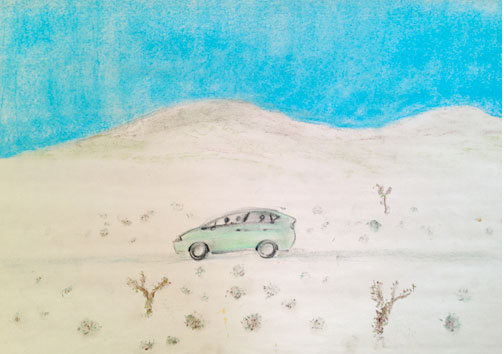 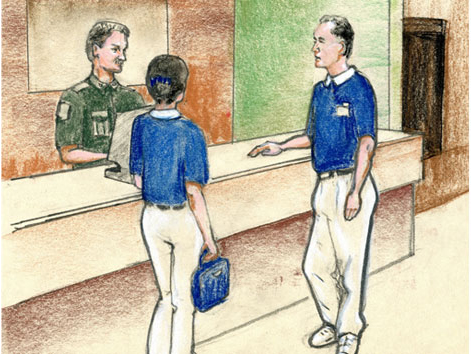 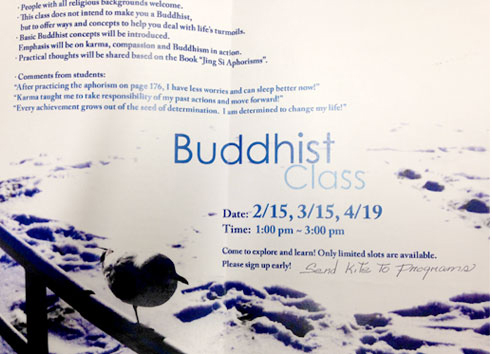 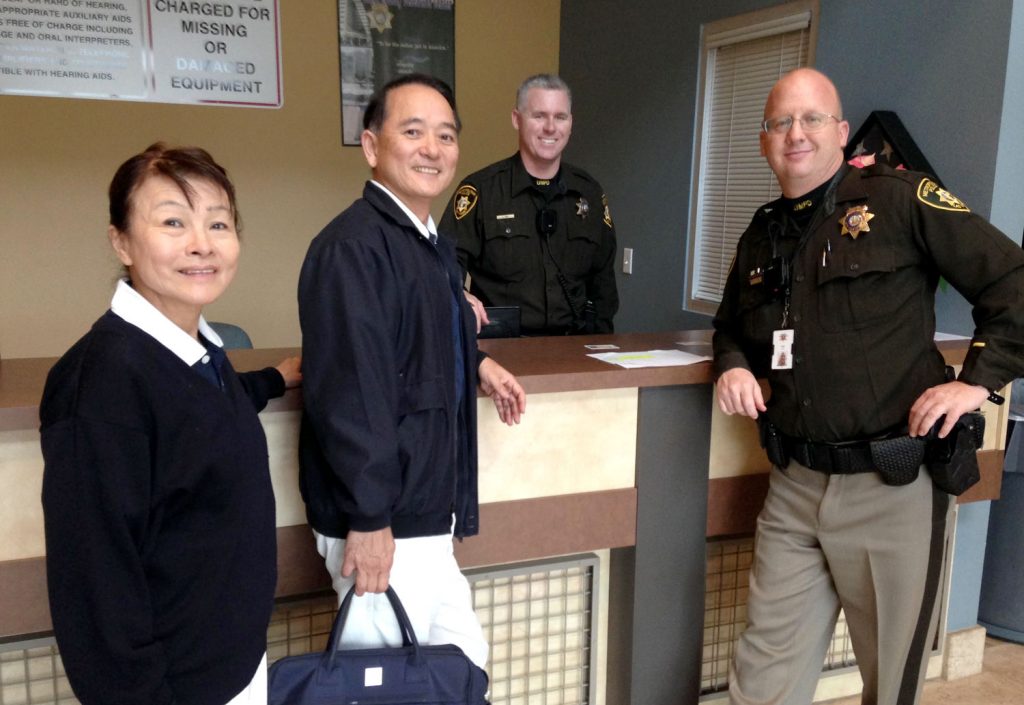 Through his unwavering determination, Kelvin (second to the left) was finally granted access to North Valley Jail, and was able to establish the first Jing Si Aphorism Book Club there.

When we treat others with loving-kindness, we will not stir up ill feelings, and we will be able to form good relationships with others.

Spiritual wisdom is cultivated in the interplay of people, objects, and events. To escape from reality, to keep away from people and events, provides no means to nurture wisdom. 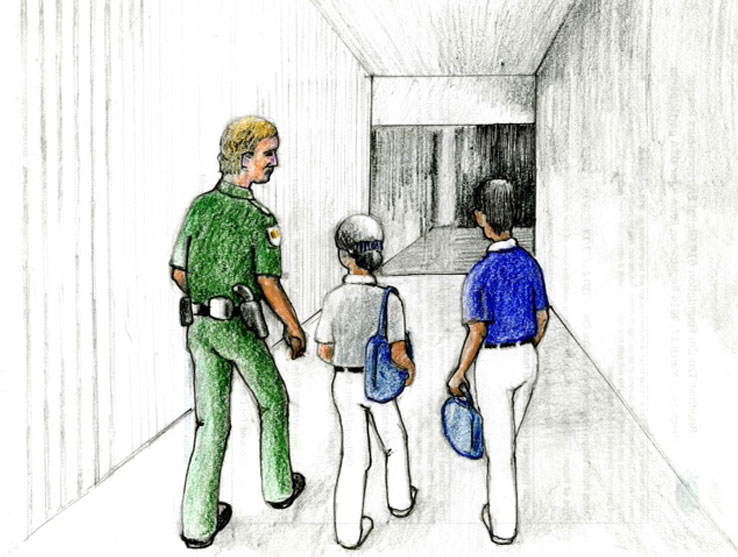 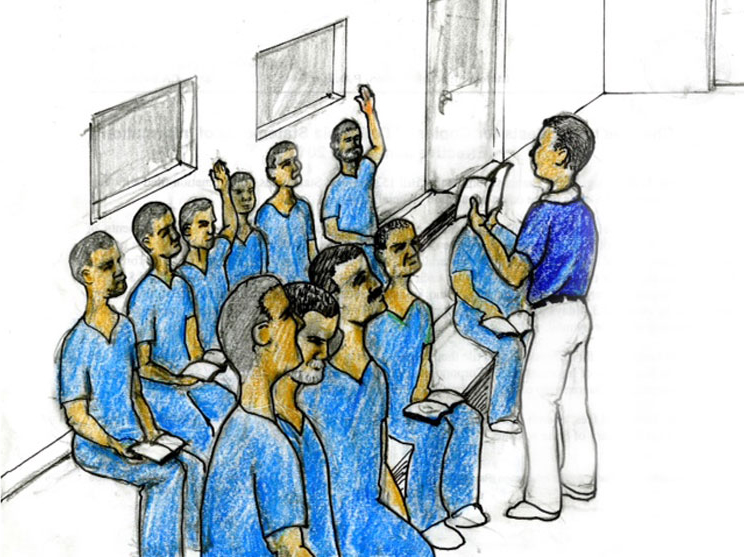 Kelvin Chen, who continues to participate actively in the program, routinely shares his personal favorite as well: “As we put the front foot down, we lift the back foot up. We let yesterday go, and focus on today.”

He will further expound upon this aphorism by telling inmates: “Our past mistakes cannot be changed. But let’s all face forward and start cultivating blessings and wisdom for the rest of our lives, as well as all of our future lives.”

Audrey Cheng, another volunteer, likes to share her personal view of how to approach reading Jing Si Aphorisms: “There is no need to read from the beginning or page by page, you can flip to any page and you will find a gem! I welcome you all to discover the wisdom in Jing Si Aphorisms!”

Kelvin often ends discussions by pointing out the benefits of practicing loving kindness and compassion: “People with more understanding should show more tolerance. Everyone has a pure Buddha nature, as well as different habits. If people are always feeling righteous and unforgiving, or overly aggressive or competitive, then they will be very difficult to get along with, and their attitude will destroy the harmony and peace in relationships. If one can stop being stubborn in opinion or reasoning, but instead be more considerate of others, then one will naturally be more persuasive when applying loving-kindness.” 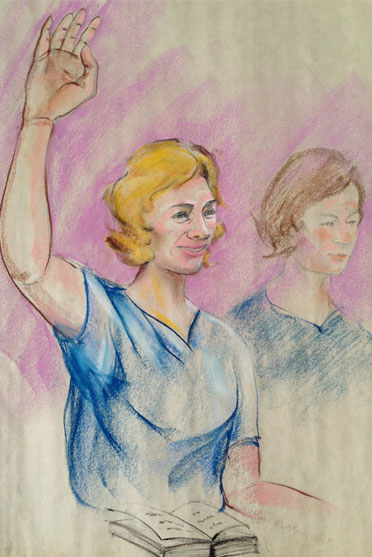 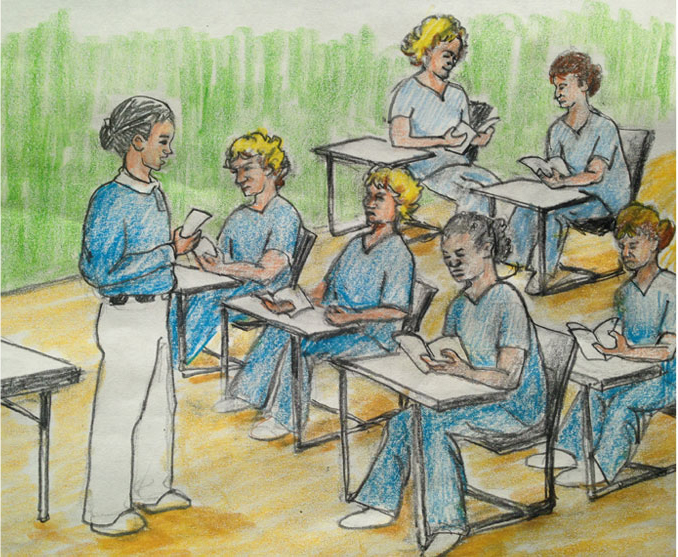 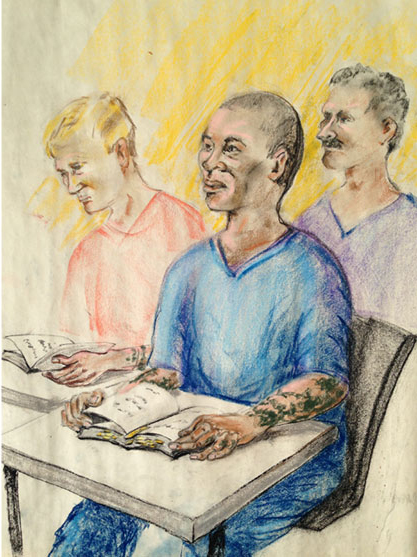 Within weeks of the program’s inception in 2013, it began to inspire inmates to initiate compassionate actions of their own design.

In December of that year, Mr. Wang, an inmate who heard about the devastation caused by Typhoon Haiyan in the Philippines, donated postage stamps and cans of coffee to Tzu Chi in the hope of raising funds for disaster relief in the region. 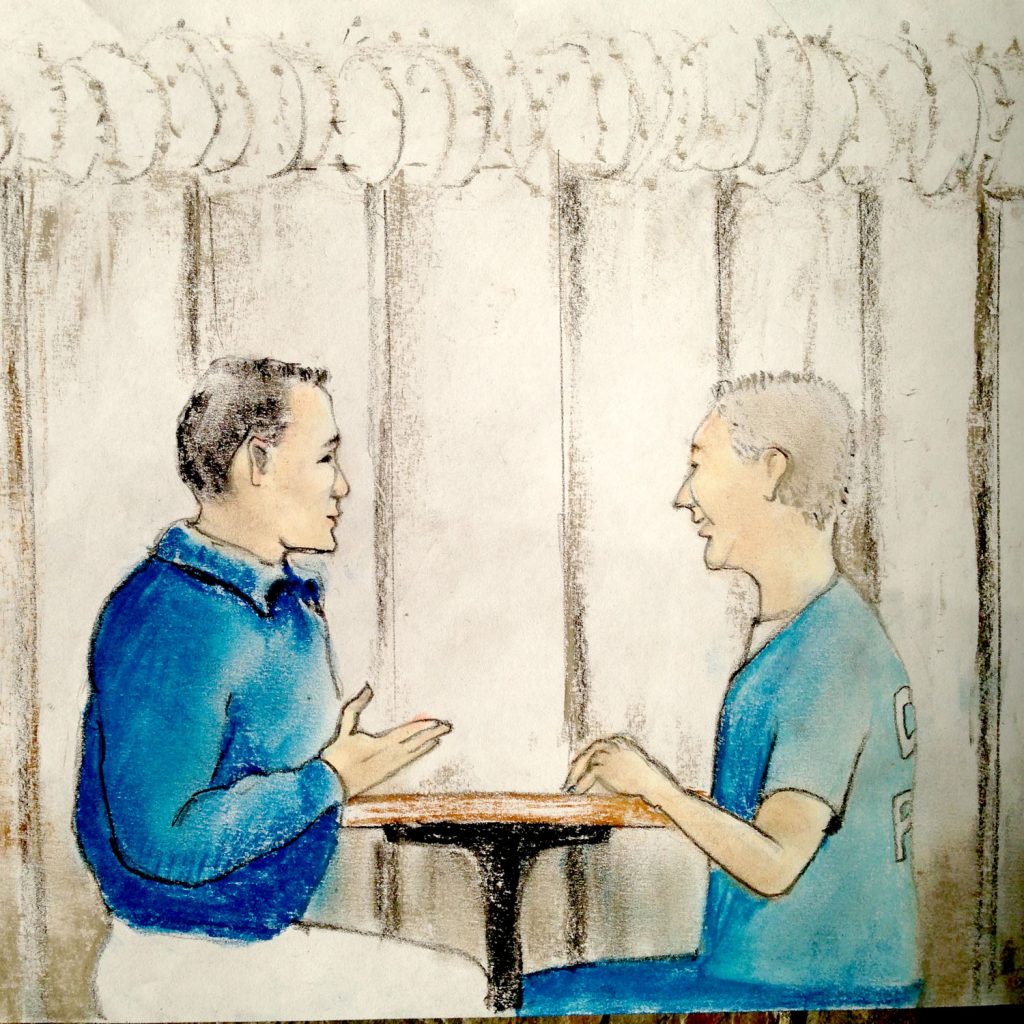 Mr. Wang enjoys a visit from a Tzu Chi volunteer and shares his fundraising plans.

Today, Tzu Chi volunteers are in active correspondence with more than 260 inmates. Some have been emotionally moved to the point that they donate money to Tzu Chi’s Natural Disaster Relief Fund on an ongoing basis.

Letters from inmates attest to the inspiration they found, and the loving kindness they put into action. 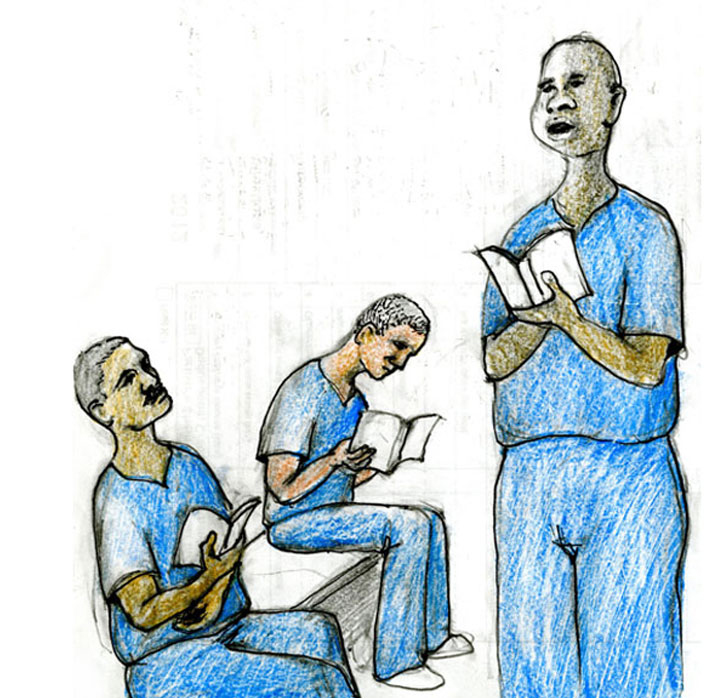 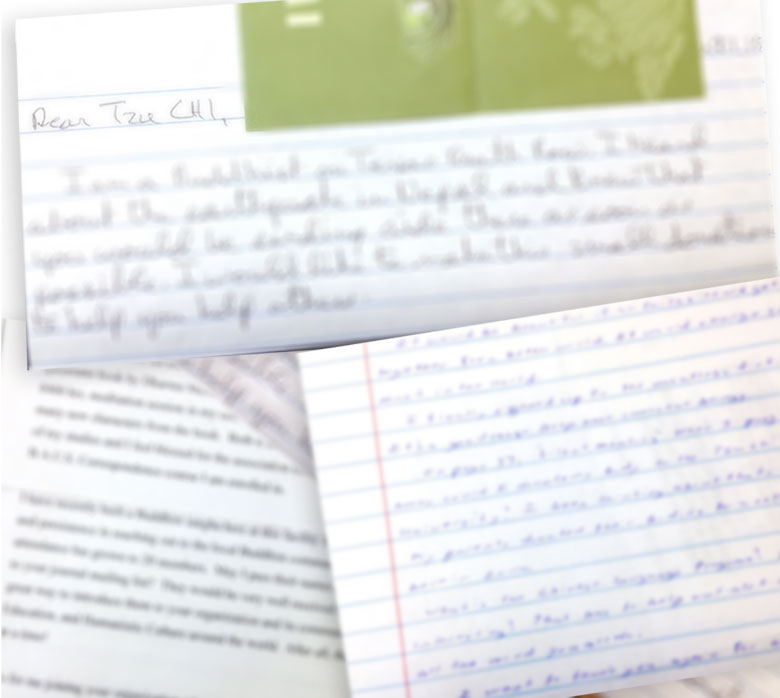 After hearing about the earthquake in Nepal in April 2015, Glenn (name has been changed) , an inmate serving time on death row, wrote his first letter to Tzu Chi, feeling compelled to send $50 for disaster relief.

Jed (name has been changed), who has been in prison for 25 years, has been writing to Tzu Chi regularly since 2013. He is now an avowed vegetarian, donates $5 per month, and has decided to donate his body to Tzu Chi University upon his passing.

Keene (name has been changed), an inmate who is living out a 100-year sentence, reads Jing Si Aphorisms every morning. The inspiration that he found through his studies and meditation led him to take it upon himself to spread the word. After a year of concerted effort, he assembled a Buddhist Sangha at his prison facility, and it already includes 20 members.

Since photography is forbidden in prisons, Kelvin Chen, who jumpstarted the program, made drawings depicting his experiences and recollections about inmates interacting with Tzu Chi volunteers and other visitors.

The time inmates spend studying Jing Si Aphorisms together is full of animated discussion, laughter, and the heartfelt sharing of life stories. 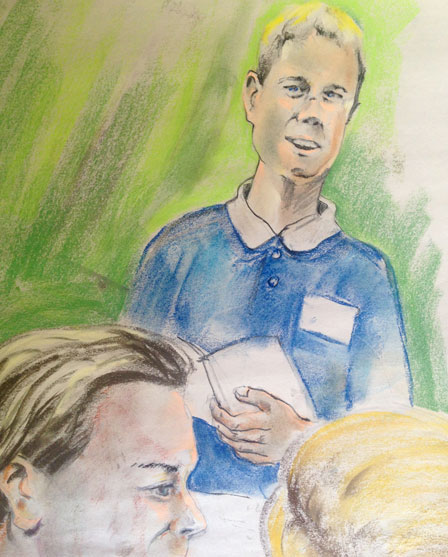 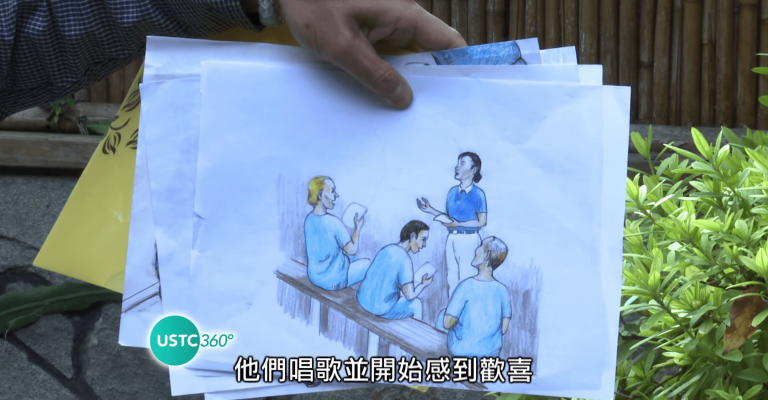 To date, Jing Si Aphorisms and Tzu Chi USA Journals were mailed to prisons in 44 States to 675 inmates, and Tzu Chi has received 522 letters, from 265 inmates, in 30 States!

Given the ongoing line of communication that was opened, and frequent donations of Jing Si Aphorisms and Tzu Chi USA Journals, Tzu Chi can now add prison inmates across America to the ever-growing list of people whose lives it is changing for the better.